*After a hiatus, Oscar-winning films are back.

In the early days of the Academy, it seems as if the voting members weren’t quite sure what they thought movies were supposed to look like, sound like, and feel like in the new sound era.  For years, the industry had solidified and polished the artistry of filmmaking, albeit without sound.  Looking forward, from 1938 on, it seems as if the industry started to hit their stride.  With Frank Capra’s second Best Picture winner, You Can’t Take It With You, the Classical Hollywood tradition is well underway.  You Can’t Take It With You combines all the charm of It Happened One Night with the sincerity of Capra’s Mr. Smith Goes to Washington and It’s a Wonderful Life, further proving Capra as one of Hollywood’s greatest auteurs.

In this latest of Capra’s effort, Jean Arthur’s Alice Sycamore is in love with Tony Kirby, son of the wealthy entrepreneur Anthony P. Kirby.  The elder Kirby is anxiously waiting for one final house to sell so that he and his business partners can build a multi-block, state-of-the-art factory in the middle of the city.  There’s one hiccup– the home of the Sycamore family/compound/community is the last piece of property needed for the Kirby building to move forward.  It’s against this backdrop that You Can’t Take It With You flourishes as a comedy/drama for the ages. 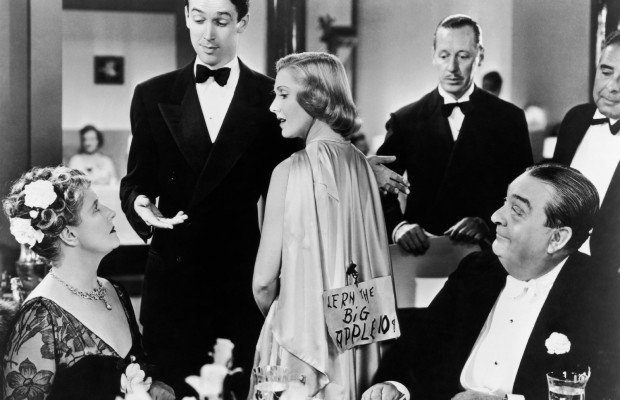 In this battle of bank accounts and values, the Sycamore family clearly wins with their dancing granddaughter, novelist daughter, firecracker-making father, tax-evading grandfather, xylophone-playing fiancé, and a couple of random gentlemen who came to visit and just never left.  It’s apparent that when the Kirby family arrives for dinner that the eccentric Sycamores will cause the effete Kirby much stress and embarrassment.  Mrs. Kirby, in particular, fulfills her role as the difficult, potential mother-in-law.  By the film’s end, the refrain of Capra’s Clarence the Angel rings clear, Kirby can’t take his money with him.  His only riches are those of the friends around him.

Teacher, scholar, student, wonderer, wanderer, fan, foe, friend, acquaintance, all of these and more, but ultimately just an Ohio daughter.
View all posts by Amy L. Darnell →
This entry was posted in Films You Missed, In General, Just Because and tagged B&W, Community, Frank Capra, Jimmy Stewart, Love, You Be You. Bookmark the permalink.