So. Yeah. Today. This week. This century. This life. Wow. This is probably going to be a long post, so you may want to go ahead and skip over this. Some of you will read it and I thank you for giving my thoughts a little bit of your time. In the past week, a Southern, conservative Republican Governor said that the battle flag of the Northern Virginia Army should no longer fly in front of the South Carolina State House. I never imagined that would happen. But sweet hell, it took nine people to be killed after a Bible study for it to happen. ‘Confederate’ flags are being removed from flagpoles and store shelves. Y’all, this is–as my Joey B. would say–a big f*cking deal. And then yesterday? The Supreme Court decreed that the Affordable Care Act wasn’t going anywhere. This directly impacts me and it’s so reassuring. There are so many of you that can breathe easier, literally and figuratively, because of that decision. And then came this morning… I couldn’t help but think of Chance Pennington after learning of the news. Chance was the first openly gay person I actually came to know. There were surely folks I went to school with that were gay, but in the 1980s, they were in the closet. Even at Ohio State, I didn’t know anyone who was out. And then I transferred to the college my parents went to, Morehead State University, and in the hills of eastern Kentucky I met Chance. I’ll never know the struggles he had, but I’m glad l learned so much from his mere presence in my life. It wasn’t until I learned about the drive-thru wedding chapels in Las Vegas that I really started to understand my straight privilege. I can be married in a drive-thru. A drive-thru. How’s that for the sanctity of traditional marriage? Now, anyone can get married in a drive-thru. 😉 My facebook feed has been so colorful today and I’ve cried so many happy tears. At this moment, I believe the world isn’t totally screwed up. You know it won’t last long with me, this positivity. But for now, it’s real. As they sang “It is Well with My Soul” in Charleston today, I know that so many hearts and souls are well and full and happy. “Now we see as in a mirror, in an allegory, but then face-to-face. Now I know partially, but then I shall know as I am known. For there are these three things that endure: Faith, Hope and Love, but the greatest of these is Love.” (1 Corinthians 12-13) Love is a really big deal. 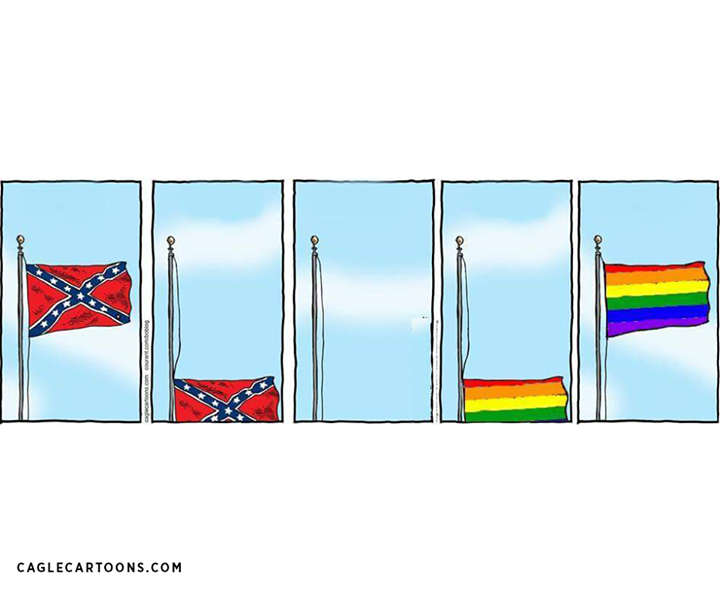