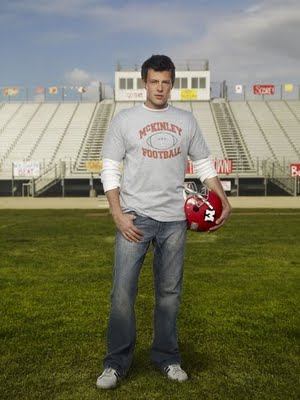 A week ago, I had an early morning text from a friend saying that she and I could/would/should (?) mourn “Finn.” I was so confused. There was only one Finn I could think of– Finn Hudson from Glee. But I couldn’t figure out the ‘mourning’ part because surely Finn, played by Canadian actor Cory Monteith, wasn’t dead. Surely not. But of course he was. A recovering addict, Monteith died of a fatal overdose of alcohol and heroin. It’s been stupefying to think of Monteith’s death. And every time I do I think about his career defining role as Lima, Ohio’s McKinley High quarterback. Oh Finn…

I fell in love with Glee from the very first episode when it ran after the American Idol finale. That summer, I was so smitten, that I read everything I could about this show, it’s stars, and the crazy notion of creating a prime time dramedy about a high school glee club, set in the perfect midwest of Ohio. As much as I loved the show, I was so very nervous. Ryan Murphy, showrunner for Glee, was the creator of the once brilliant Nip/Tuck, another show I once adored– key word “once.” Season one of Nip/Tuck was enthralling. And from season two on Nip/Tuck became a mish-mash of plastic television akin to Jocelyn Wildenstein’s face– frightening and gross.

I feared for Glee and my fears proved not to be unwarranted. I can barely pay attention when I watch Glee now. I’ve stopped buying the music and DVDs. I continue to watch because I love a few of the characters. And now one of those characters is gone.

I did love Finn Hudson and consequently Monteith. When I went back and watched that pilot episode, the brilliance of Glee and its performers, especially Monteith, are clearly in the spotlight. Monteith’s Finn was the heart of the show, the heart of every drumbeat and high B. That first episode, and so many after, showed Monteith bringing a beautifully sincere Finn into focus. This was a kid who meant well, who had a good heart despite all of the distractions and detractors that could’ve sullied his generosity of spirit. When he reaches for the rafters in the “Don’t Stop Believin'” number you see the hope and joy of a not-so-bright, fatherless boy thinking about the future. His glee is our glee.

Teacher, scholar, student, wonderer, wanderer, fan, foe, friend, acquaintance, all of these and more, but ultimately just an Ohio daughter.
View all posts by Amy L. Darnell →
This entry was posted in Photo of the Week and tagged Addiction, Cory Monteith, Glee, Music, Song, Television. Bookmark the permalink.