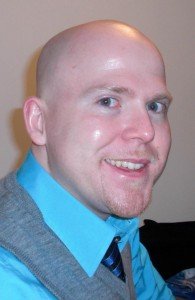 I cannot believe that I’m writing this. Well, I can believe it, but I certainly never wanted to do it.

When I was grieving the loss of my parents I used to get so angry at folks who said that parents are never supposed to lose their children. I always felt as if it were a slap at those of us who had lost our parents– that our loss wasn’t as grave as the other. Losing a parent isn’t severe or devastating, is what I thought I heard them say. I’ve started to understand the statement more, especially since Thanksgiving 2011, when a college friend alerted me to the fact that a former high school student of mine was gravely ill as a result of metastatic melanoma.

I first met Joey Stevens (as I knew him) when I taught English and French at Symmes Valley High School in Willow Wood, Ohio. I had just finished my M.A. at the University of Texas at Austin, and I thought I was the cat’s pajamas. I seriously thought this school was so lucky to have me. After all, the principal had to look up what a vita was! Of course they were lucky to have me. They were lucky to have my erudite ways; my education; my sense of right and wrong… Can you sense my arrogance? I was a tad too sure of myself, not only for my own good, but for my students’ good. In reality, I needed Symmes Valley, not the other way around. I needed them to teach me how to teach; to help me learn how to learn. They were my teachers.

I don’t know when I really keyed into Joe. I noticed other students earlier. I started paying attention to Abe when he gave me a watercolor he’d done of Grendel’s mother in art class. I noticed Rachel when she set herself apart in her French I class, as the brightest student in the room. Joey? It was probably that day when I commented on Abe’s Dead Kennedys t-shirt. I couldn’t help myself. Here in this tiny, conservative, rural school was a kid wearing a Dead Kennedys t-shirt! “I like your shirt,” is all I said, but I could practically hear the reverberations between that trio of friends– Abe, Joey, and Jesse. It was as if they were telepathically saying to each other: What? Her? She likes the Dead Kennedys? What the fuck? I was in. I think I could’ve persuaded them to break all kinds of laws that year, but I used my influence for good, not evil. 🙂 Those three guys became ‘my boys’ in the sense that I wanted them to succeed and get out of the stringent communities they were tied to. If they wanted to stay in Lawrence County, so be it, but I wanted it to be their choice to stay, not their lack of opportunity to leave.

About halfway through the school year I remember checking out at the Pick-N-Save grocery store and there was Joe at the end of the lane bagging up my groceries. I remembering being horribly embarrassed as I realized I had bought alcohol–albeit sad, pathetic wine coolers. How could I? I had tainted my credibility and authority with the class valedictorian by buying alcohol. Now granted I was perfectly within my right to buy such spirits, but still… How could I? If I remember correctly, Joe was grinning as he bagged my groceries. No matter the grin, I refused to do any imbibing the rest of the year.

When I think of Joe, two memories come quickly to mind. The first was a certain poem he wrote for and about me. In my self-assured first-year-teacher mode I decided I would bring some ‘culture’ to SVHS and so we started a ‘literary journal.’ Believe me, much liberty was taken with that title. When I think about the interview I gave for the yearbook about the ‘journal’… remember when I said I was arrogant? Joe wrote a poem entitled “S.V. Queen” about a certain new British Literature teacher he had and submitted it to The Voice. Not only was the poem selected for publication, it was voted the best poem in the journal. Imagine, if you will, a full gymnasium at the end of the year awards ceremony. Imagine, if you will, a certain young man taking to the lectern to read his masterpiece. Imagine, if you will, a photograph of that moment: Joe, in the center reading aloud. Principal Hankins, to Joe’s left, laughing at the moment, while that teacher was to Joe’s right looking at the ceiling, shaking her head.

My final memory of Joe as a high school student was his valedictorian speech. Joe wanted to ‘stick it to the man’ in his speech. In part, he wanted to call out all of the small minds that had never thought much of him, that had ignored him outright, or ignored him with their pettiness. He knew that the salutatorian was going to proselytize and play the holier-than-thou card he constantly carried in his back pocket. Joe wanted to quote his punk hero, Jello Biafra, in the speech. I remember reading the first draft and trying to get Joe to bring it down a notch. Graduation really wasn’t the time to give the school and community the middle finger. Don’t let them have the upper hand; Go out with class; You’re better than they are— you name it, I said it to Joe. He kept the Biafra quotation in, and now looking back, I’m glad. Besides, half of that audience didn’t even get it. But Joe did and that’s what counts.

In all honesty, I don’t even know what to say. I guess part of the reason why I wanted to memorialize Joe this way was to simply make the speech act that he existed and he mattered.

One of the teaching moments I remember most was in the spring when we read “Elegy Written in a Country Churchyard” by Thomas Gray. To this day, it’s one of my favorite poems because of the experience I had teaching it in the classroom overlooking State Route 141.  I explained that the poem testifies, that for most of us, death means obscurity since we will be forgotten by those who come after us. I found myself getting choked up as I reminded the students of the small, old cemetery down the road from the school. How many of us, in that room, knew those in their earthen tombs? As time marches on, we only know them by their headstones. This is my attempt to say that Joe is more than a headstone. He mattered to us, those who knew and cared about him.

Joe died in the early morning hours today. In his final days, he told a friend of his, Alicia Bowling, to look up to the sky after he was gone and she would know he was looking down upon her with his smile. When she went into the world today she saw the image below. It appears as if he’s found his Gilead balm. 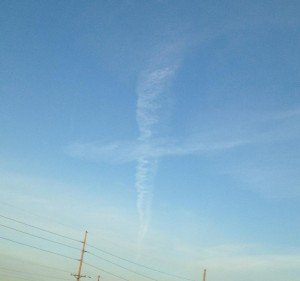 Here rests his head upon the lap of Earth
A youth to Fortune and to Fame unknown.
Fair Science frowned not on his humble birth,
And Melacholy marked him for her own.

Large was his bounty, and his soul sincere,
Heaven did a recompense as largely send:
He gave to Misery all he had, a tear,
He gained from Heaven (’twas all he wish’d) a friend.

No farther seek his merits to disclose,
Or draw his frailties from their dread abode
(There they alike in trembling hope repose),
The bosom of his Father and his God.

from “Elegy Written in a Country Churchyard” by Thomas Gray

Teacher, scholar, student, wonderer, wanderer, fan, foe, friend, acquaintance, all of these and more, but ultimately just an Ohio daughter.
View all posts by Amy L. Darnell →
This entry was posted in Just Because and tagged R.I.P.. Bookmark the permalink.