While looking through some old class files, I found a document that began “Why I love hoop dreams so.”  A stream-of-consciousness-no-proofreading kind of document, I realized that I must have written it after showing Hoop Dreams in my independent film class a few years back.  It was my way of listing everything I hoped my students noticed in the film.  So, with better grammar, spelling, and punctuation is “Why I love Hoop Dreams So.”

Why I love Hoop Dreams so…

First of all, I always go back to that scene. That scene where Arthur watches his father buy drugs. I will never forget seeing that for the first time and audibly gasping at the sight. And Arthur motioning to this father with his left hand, as if to say, “Come here!”, where the roles become reversed, where he tries to take care of his father, instead of his father taking care of him. And the way that left hand stays at his forehead as he watches and we watch… it takes my breath away.

I cried several times during the film and even as I was talking about the film with you, I choked up and had to move on before I cried in front of you. How many Arthurs and Williams are there? And we never would’ve known these two boys/young men had it not been for these filmmakers….

The racial politics are firmly at work in this film. The only black college head coach in the film was John Thompson of Georgetown. Yet the workers, the ones upon whom the biggest pressure is put, is the young black male. Ironically, Coach Pingatore kept leveling the insult to the St. Joe players that they weren’t working. Remember the wind sprints as he yells at them for not working and they’re all bent over, sweating, and gasping for breath? That’s why Spike’s ‘lecture’ about the politics of college athletics is so compelling. On the one hand, it’s a good thing that the Nike All-American Camp directors invited him; on the other hand it’s horrible that they would need to do so. And the coaches talking about how they have to get them in grade school… to “get them” before anyone else “gets them” like these boys (and that’s what they are—BOYS) are a possession. And what an irony that Arthur is called “Man” by his family, because he is the man in regards to how much his family depends on him.

I think about Curtis and Bo reliving their basketball hopes and dreams through William and Arthur, fairly and unfairly. William saying “It’s not right for Curtis to put his dreams on top of [him].” And Bo, saying “Junior”, when someone says Arthur’s name, in an attempt to get his name in the spotlight, just the slightest bit. And both of those men are now dead, killed in Chicago. A fate that could very well happen to William and Arthur—after all Arthur was mugged one week before he graduated from high school. That’s why there is a celebration for Arthur turning 18… because unfortunately too many young men in the inner city don’t make it to 18.

Recognizing the faces at the Nike All-American camp that did make it… Three of Michigan’s Fab 5 that won the NCAA championship their freshman year. Chris Webber, Jalen Rose, and Juwan Howard all make an appearance in the film. But they were three of how many? I think of my own nephew who went to that same camp. He’ll never win an NBA championship, but he’s getting a top-notch education because of his skills on the court. What do we do about those that don’t have those skills? How do they get their education?

And Arthur’s mother… when she sobs knowing she got the highest score on the nursing test… Sobbing because she knows that she can get a job. At the graduation, a woman sings “His Eye is on the Sparrow,” as the camera pans the empty seats at the graduation. I agree with movie critic Gene Siskel, that’s where there needed to be cheering crowds—at her graduation, not the basketball games. And I’m sitting there desperately trying not to sob with her at the joy. “He IS watching” Sheila.  He is.

I’m always struck by the power of the metaphor of the empty basketball court. William making a shot with his eyes closed in his empty childhood gymnasium; Arthur lingering after the city championship. Sometimes that silence can be as deafening as cheering throngs.

The parallel stories… William getting all of the praise and attention, yet it is Arthur who actually played professional basketball in the IBA.  It wasn’t the NBA, but he was paid to play basketball.

When Arthur plays his dad in a game of one-on-one, the anger and the years of pain come to the surface and you almost relish Arthur sinking that 30 foot shot–as an all-deserved middle-finger to Bo, yet, I don’t hate Bo.  I was a jumble of emotions just like those involved. And what about Curtis who’s unable to make the baskets he once was able to? You see his blank face and know that his mind is probably, unfortunately, numb as well.

And their struggle with basic education vs. my own privilege of getting into college.  Ten plus years ago, the ACT changed their testing procedures so that the average score went from around a 16 to a 20.  I think about William’s struggle to get the most basic score. I think about Jon Holman, whom I graduated high school with. He was nothing short of a phenomenal athlete. First team all-state in football after being an all-state honorable mention the year before; a state champ in wrestling, after finishing third the year before; but not a star pupil.  His chances at a scholarship went out the window. More importantly, without the life skills of a good education (including high school), what opportunities did he have?  I have no idea of what Jon is doing now.  I can’t help but think of A.E. Housman.  …”And the name died before the man.”

I think of the privilege William had throughout… to the point that the encyclopedia lady got his brother Curtis a job.

I think of Arthur and William becoming fathers at an early age and the struggles they are ‘stuck’ with before they even get out of high school.

And I get angry that the film wasn’t nominated for Best Picture or Best Documentary. In one final insult, these young men have to fight to get the highest recognition. It’s not fair and I want that for them, their families, and those filmmakers who spent seven years on this film. The biggest criticism of the film by academy voters… too long. Three hours compared to seven years compared to the lifetimes the ‘characters’ have lived…. It makes me mad even now.

The National Film Registry exists to preserve American films that are significant works of art about the American experience. Films are only eligible 10 years after they were released. In its first year of eligibility, Hoop Dreams was selected to be preserved.  Finally, someone got it right. 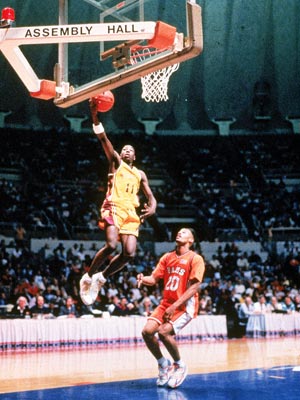