My good friend Dr. Mark Cunningham is returning to a practice he had for quite a while– watching a film a day.  Although I’m doubtful I can do the same, I’m much more certain that I can recommend a great film every week.  Today, begins my efforts.  These won’t be Oscar winners, necessarily, because award-winning films aren’t always the best film of the year (which is a post for another day).  Nor are they films that people have necessarily ignored.  Revenues for award-winning films often increase in the award season.  Instead, these are the films I try to suggest when friends, colleagues, and students ask for movies to see over the weekend.  Sometimes they’re the films I ‘push’ onto people with the ubiquitous line “You should see this!”  Sometimes it ends well (Memento).  Sometimes it ends horribly (Requiem for a Dream).  And sometimes folks non-verbally tell you , “I’m good.  I don’t need your suggestions (30 for 30).”

A movie that you probably missed but shouldn’t is He Got Game.  Written and directed by Spike Lee, He Got Game, is a wonderfully astute and heartfelt look at the father-son relationship which plays out (no pun intended) on the basketball court.  With a reliably good performance by Denzel Washington as Jake Shuttlesworth, He Got Game really soars because of the sublime work of NBA All-Star and Olympian Ray Allen as Jesus Shuttleworth.  The wonder of this film occurs most beautifully as the all-American music of Aaron Copland builds and soars and lifts and falls and rests… Watching the film you understand why Lee said, “When I listen to Aaron Copland’s music, I hear America, and basketball is America.”

Don’t miss He Got Game. 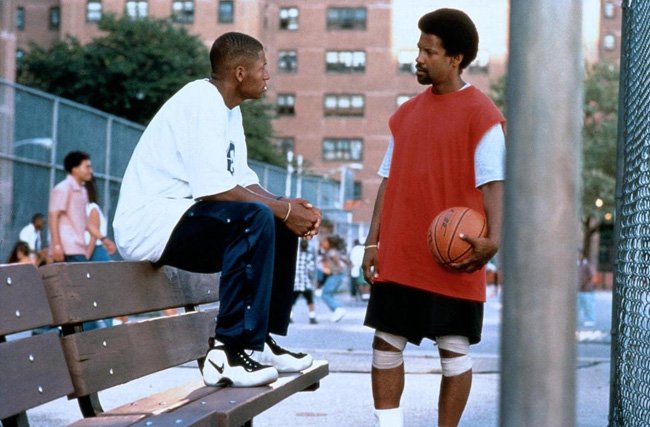 Teacher, scholar, student, wonderer, wanderer, fan, foe, friend, acquaintance, all of these and more, but ultimately just an Ohio daughter.
View all posts by Amy L. Darnell →
This entry was posted in Films You Missed and tagged Basketball, Film, Spike Lee, Sports. Bookmark the permalink.