It’s no coincidence that St. Matthews-in-the-City Church in Auckland, New Zealand has chosen the Christmas season to reveal their latest billboard ad depicting the Virgin Mary. Titled “Mary is in the Pink,” the ad is meant to show Mary, full of grace, juxtaposed with situations today’s women can find themselves in. According to Yahoo’s The Sideshow, “Vicar Glynn Cardy said that this year St. Matthews wanted to focus on what it was like for a real mother with a real child. ‘It’s about a real pregnancy, a real mother and a real child. It’s about real anxiety, courage and hope.'” Two year’s ago, the same church featured a billboard with Mary and Joseph. 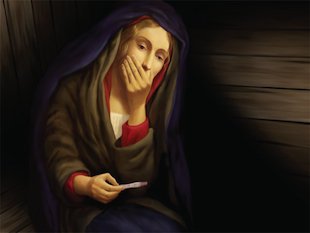