Over the last few days, I’ve spent a few hours photo editing some photographs of myself. There’s something incredibly invigorating about adding this color or this effect or this texture to a photograph, to make it perform as I want it to. It’s a way of creating a two-dimensional performance rather than the traditional 4th-wall kind. As fun as I was having making myself ‘blue’ or ‘weathered’, I am well aware of the ways in which photo editing can be perceived as deception. This “Evolution” video from Dove highlights the point well.

As much as I enjoy spots like the one above and the two that follow (“Onslaught” and “Amy”), I do have to point out that Unilever, the company that owns the Dove brand also owns the brand Axe. On the one hand Dove purports to support and champion women and their natural beauty, while Axe advertisements smack of blatant objectification of women. That is a point for another day…

Statistics point out that 80% of women are unhappy with their appearance. Furthermore, up to 10 million women and 1 million men suffer from anorexia or bulimia. These numbers include the millions who suffer from binge eating. The statistics regarding young women and eating disorders are heartbreaking. Media images cannot cause these damaging diseases, but they sure as hell aren’t helping. Now word comes that the American Medical Association is warning against the act of photo editing because of the unrealistic expectations it can help foster in young women. From their recent meeting, the AMA says, “The appearance of advertisements with extremely altered models can create unrealistic expectations of appropriate body image. In one image, a model’s waist was slimmed so severely, her head appeared to be wider than her waist,” according to Dr. McAneny. “We must stop exposing impressionable children and teenagers to advertisements portraying models with body types only attainable with the help of photo editing software.” The photo Dr. McAneny makes reference to is an (in)famous photo of Filippa Hamilton. As you can see below, the photo to the left shows Hamilton as a circus sideshow version of her actual self, after photo editors finished with her image. 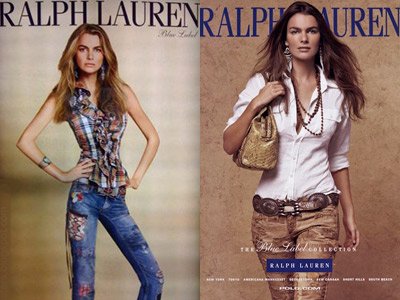 Hamilton, herself, believes she was fired from Ralph Lauren because she was too large. Whether that is the case or not, her altered image highlights the ways in which insecure young women, in a media crazed age, can begin to be self-destructive to themselves– all to achieve a, literally, unreal ‘standard.’

When thinking about eating disorders, I can’t help but think of the inequities of our medical research and the by-product message it gives to young women. Eating disorders effect around 10 million women and in 2005 had $12 million research dollars committed to its cause. By the same token, Alzheimer’s effects around 6.5 million people yet receives 54 times the amount of financial support. Schizophrenia effects 22% of the people Eating Disorders does, yet receives 29 times the funding.

Girls and women deserve better, all the way around.

I’m a big fan of Timothy Greenfield-Sanders and his work. He eloquently explains why he doesn’t want to have his work photo-edited in this Huffington Post editorial. Indeed, anyone who looks at his portraits of Beverly Johnson, Carol Alt and Karen Bjornson and finds they need some ‘retouching’…. well, have it, but keep it to yourself. I’ll gladly look at these beautiful ‘flaws’ any day. 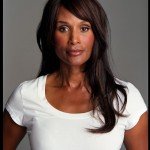 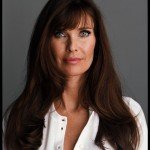 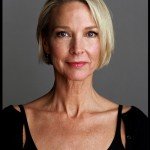 Teacher, scholar, student, wonderer, wanderer, fan, foe, friend, acquaintance, all of these and more, but ultimately just an Ohio daughter.
View all posts by Amy L. Darnell →
This entry was posted in In General and tagged Mass Media, Photography, Writing Out Loud. Bookmark the permalink.