Feminism has been on my mind the last few days. It started when a friend posted this image on facebook. 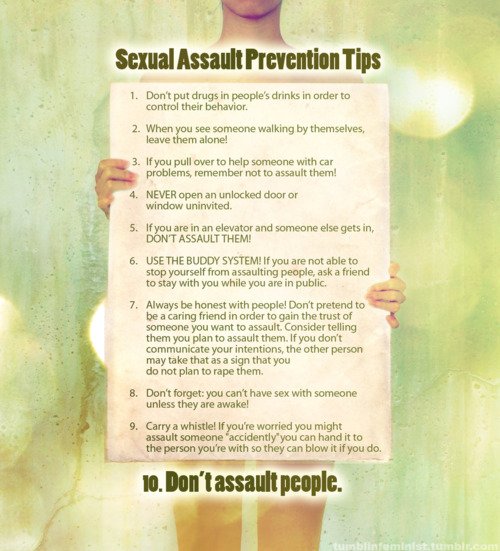 She had shared it via a the group SlutWalk Austin. That group and the image got me thinking about the continually horrible messages that we share in the United States about rape– that women are ultimately asking for it. Is a cancer patient asking for it, when they deal with any kind of toxic material their entire life? Do gunshot victims ask for it when they don’t wear bullet proof vests? The list goes on and on. Women NEVER ask to be raped. Anyone who perpetuates it is a liar. Anyone who believes it is ignorant. This PSA from Scotland puts it all into perfect perspective.


Why are we a civilization that teaches women how not to be raped, instead of telling men not to rape?

The statistics regarding sexual assault highlight other stereotypes about rape. Rape occurs in places women know, by people they know. The minority of occasions are in the ‘dark alley by a stranger.’ According to the Bureau of Justice Statistics (USA):

“38% of victims were raped by a friend or acquaintance
28% by “an intimate”
7% by another relative
26% were committed by a stranger to the victim.”

“About four out of ten sexual assaults take place at the victim’s own home.”

Caring about the rights of women isn’t liberal, wacky, or militant. It’s merely human. Cheris Kramerae said it best: “Feminism is the radical notion that women are human beings.” What can you do to help end this culture of rape stereotypes and promote a ‘radical notion’ that women deserve decency?

Teacher, scholar, student, wonderer, wanderer, fan, foe, friend, acquaintance, all of these and more, but ultimately just an Ohio daughter.
View all posts by Amy L. Darnell →
This entry was posted in In General and tagged Social Justice, Writing Out Loud. Bookmark the permalink.