The debate over free (?) speech continues after the Supreme Court voted 8-1 to protect the Westboro Baptist Church’s right to protest military funerals.  WBC and its founder Fred Phelps are famous/infamous for their protests that began with the mantra God Hates Fags.  In their ever-emerging efforts to show that God hates lots of folks, they’ve taken to protesting military funerals.  The father of a fallen Marine, Albert Snyder,  decided enough was enough and sued the Church for emotional distress, amongst other charges.  In a series of judgments and appeals the case made it to the Supreme Court.

Wednesday the Court upheld WBC’s rights to free speech under the First Amendment.  Some are furious– arguing that Phelps and company use hate speech, and that hate speech is not protected under the Constitution.  However, others believe that protecting even the most vile speech allows our country to achieve a greater good.  Recently, fashion designer John Galiano was fired from the Dior fashion house for anti-Semitic statements that are against French law?  Should our own laws limit speech?

What do you think? 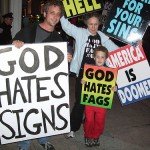 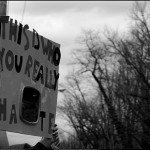 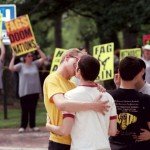 Teacher, scholar, student, wonderer, wanderer, fan, foe, friend, acquaintance, all of these and more, but ultimately just an Ohio daughter.
View all posts by Amy L. Darnell →
This entry was posted in In General and tagged Mass Media, Social Justice. Bookmark the permalink.