President Bill Clinton, in his first inaugural address, famously said “There is nothing wrong in America that can’t be fixed with what is right in America.”  The following story from the Austin American Statesman reminds me that he was right, absolutely right. 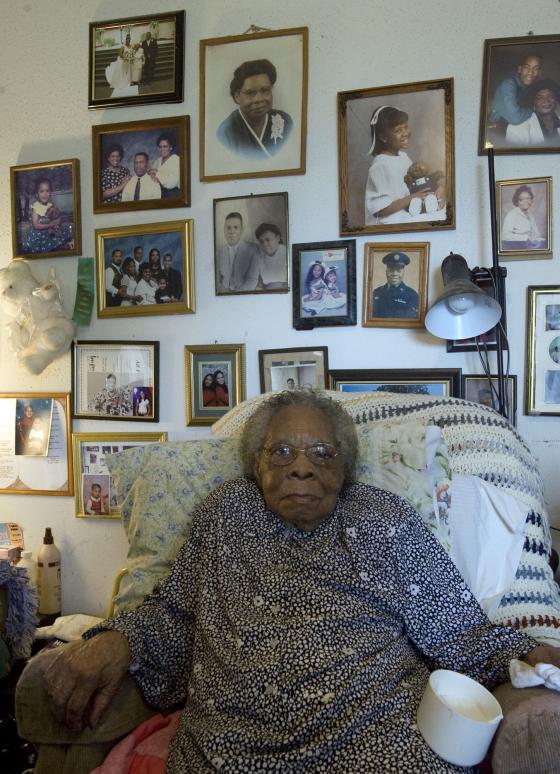 Daughter of slave votes for Obama

Amanda Jones, 109, the daughter of a man born into slavery, has lived a life long enough to touch three centuries. And after voting consistently as a Democrat for 70 years, she has voted early for the country’s first black presidential nominee.

The middle child of 13, Jones, who is African American, is part of a family that has lived in Republican-leaning Bastrop County for five generations. The family has remained a fixture in Cedar Creek and other parts of the county, even when its members had to eat at segregated barbecue dives and walk through the back door while white customers walked through the front, said Amanda Jones’ 68-year-old daughter, Joyce Jones.

For at least a decade, Amanda Jones worked as a maid for $20 a month, Joyce Jones said. She was a housewife for 72 years and helped her now-deceased husband, C.L. Jones, manage a store.

Amanda Jones, a delicate, thin woman wearing golden-rimmed glasses, giggled as the family discussed this year’s presidential election. She is too weak to go the polls, so two of her 10 children — Eloise Baker, 75, and Joyce Jones — helped her fill out a mail-in ballot for Barack Obama, Baker said. “I feel good about voting for him,” Amanda Jones said.

Jones’ father herded sheep as a slave until he was 12, according to the family, and once he was freed, he was a farmer who raised cows, hogs and turkeys on land he owned. Her mother was born right after the Emancipation Proclamation was signed, Joyce Jones said. The family owned more than 100 acres of land in Cedar Creek at one point, she said.

Amanda Jones’ father urged her to exercise her right to vote, despite discriminatory practices at the polls and poll taxes meant to keep black and poor people from voting. Those practices were outlawed for federal elections with the 24th Amendment in 1964, but not for state and local races in Texas until 1966.

Amanda Jones says she cast her first presidential vote for Franklin Roosevelt, but she doesn’t recall which of his four terms that was. When she did vote, she paid a poll tax, her daughters said. That she is able, for the first time, to vote for a black presidential nominee for free fills her with joy, Jones said.

One of Amanda Jones’ 33 grandchildren, Brenda Baker, 44, said the family is moved by the election’s significance to the matriarch.

“It’s awesome to me that we have such a pillar of our family still with us,” Baker said. “It’s awesome to see what she’s done, and all her hard work, and to see that she may be able to see the results of all that hard work” if Obama is elected, she said.

Jones lives in a small gray house with white trim just off Texas 21. These days, a curious white kitten and a sleepy old black dog guard the house. Inside are photographs and relics of a long, full life, including a letter from then-Gov. George Bush in 1998 commemorating her 100th birthday. A black-and-white picture of her in a long flapper-style dress was taken between 1912 and 1918 — no one can remember the exact year, Baker said with a chuckle.

Jones is part of a small percentage of active voters above the age of 100 in the state — and the country.

Sister Cecilia Gaudette, a 106-year-old nun born in New Hampshire but living in Rome, made recent national headlines as the nation’s oldest voter. But if Texas records are any indication, that’s hard to validate.

Secretary of State spokeswoman Ashley Burton said Texas can’t confirm whether Jones is the state’s oldest active voter because there is too much voter information to sort through. At the county level, there are other challenges. An election official in Hays County said its records are not searchable by age, and Bastrop County elections administrator Nora Cano said that some counties automatically list voters who were born before the turn of the 20th century with birth dates of January 1900.

Making it to see the election results on Nov. 5 is important, but Jones is resting up for another milestone: her 110th birthday in December. “God has been good to me,” she said.

Teacher, scholar, student, wonderer, wanderer, fan, foe, friend, acquaintance, all of these and more, but ultimately just an Ohio daughter.
View all posts by Amy L. Darnell →
This entry was posted in In General and tagged Barack Obama, Democracy, Elections, History, Politics, Voting. Bookmark the permalink.