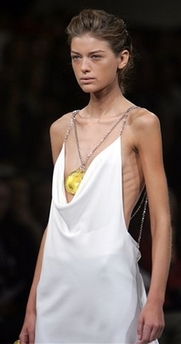 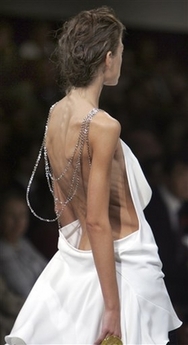 The French parliament’s lower house adopted a groundbreaking bill Tuesday that would make it illegal for anyone — including fashion magazines, advertisers and Web sites — to publicly incite extreme thinness.

The National Assembly approved the bill in a series of votes Tuesday, after the legislation won unanimous support from the ruling conservative UMP party. It goes to the Senate in the coming weeks.

Fashion industry experts said that, if passed, the law would be the strongest of its kind anywhere. Leaders in French couture are opposed to the idea of legal boundaries on beauty standards.

The bill was the latest and strongest of measures proposed after the 2006 anorexia-linked death of a Brazilian model prompted efforts throughout the international fashion industry to address the repercussions of using ultra-thin models.

Conservative lawmaker Valery Boyer, author of the law, argued that encouraging anorexia or severe weight loss should be punishable in court.

Doctors and psychologists treating patients with anorexia nervosa — a disorder characterized by an abnormal fear of becoming overweight — welcomed the government’s efforts to fight self-inflicted starvation, but warned that its link with media images remains hazy.

But Boyer said such measures did not go far enough.

Her bill has mainly brought focus to pro-anorexic Web sites that give advice on how to eat an apple a day — and nothing else.

But Boyer insisted in her speech to lawmakers Tuesday that the legislation was much broader and could, in theory, be used against many facets of the fashion industry.

It would give judges the power to imprison and fine offenders up to $47,000 if found guilty of “inciting others to deprive themselves of food” to an “excessive” degree, Boyer said in a telephone interview before the parliamentary session.

Judges could also sanction those responsible for a magazine photo of a model whose “excessive thinness … altered her health,” she said.

Boyer said she was focusing on women’s health, though the bill applies to models of both sexes. The French Health Ministry says most of the 30,000 to 40,000 people with anorexia in France are women.

Didier Grumbach, president of the influential French Federation of Couture, said he was not aware how broad the proposed legislation was, and made no secret of his strong disapproval of such a sweeping measure.

“Never will we accept in our profession that a judge decides if a young girl is skinny or not skinny,” he said. “That doesn’t exist in the world, and it will certainly not exist in France.”

Marleen S. Williams, a psychology professor at Brigham Young University in Utah who researches the media’s effect on anorexic women, said it was nearly impossible to prove that the media causes eating disorders.

Williams said studies show fewer eating disorders in “cultures that value full-bodied women.” Yet with the new French legal initiative, she fears, “you’re putting your finger in one hole in the dike, but there are other holes, and it’s much more complex than that.”

Teacher, scholar, student, wonderer, wanderer, fan, foe, friend, acquaintance, all of these and more, but ultimately just an Ohio daughter.
View all posts by Amy L. Darnell →
This entry was posted in In General and tagged In General. Bookmark the permalink.